palm procession
Hosanna sing
a road of robes
for colt and King
the people praise
He’s here! He’s come!
our saving grace
triumphant one
the figless tree
is cursed and dead
the time of temple
is at its end
and we will eat
with Christ, a last
before our treason
comes to pass
for come it does
with blood and bruise
denied and mocked
the King of Jews
and when He dies
on nail and wood
the tapestry
is torn for good
centurion
in witness, awed
proclaims the man
the Son of God

He was despised and rejected by men, a man of sorrows, and familiar with suffering. Like one from whom men hide their faces he was despised, and we esteemed him not. Surely he took up our infirmities and carried our sorrows, yet we considered him stricken by God, smitten by him, and afflicted. But he was pierced for our transgressions, he was crushed for our iniquities; the punishment that brought us peace was upon him, and by his wounds we are healed. We all, like sheep, have gone astray, each of us has turned to his own way; and the LORD has laid on him the iniquity of us all. He was oppressed and afflicted, yet he did not open his mouth; he was led like a lamb to the slaughter, and as a sheep before her shearers is silent, so he did not open his mouth. Isaiah 53:3-7

Then Mary took about a pint of pure nard, an expensive perfume; she poured it on Jesus’ feet and wiped his feet with her hair. And the house was filled with the fragrance of the perfume. John 12:3

planning your party
is open windows
in March
awakening
designs pop
against daily tasks
and winning ideas
gaily splash about
like happy puddles
beneath your boots
vision is unclouded
creativity unlocked
and you,
mon chou
are the breeze 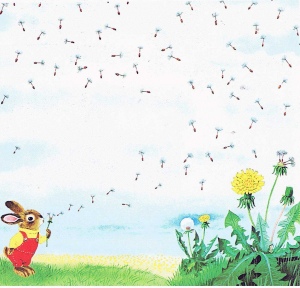 And your words became to me a joy and the delight of my heart, for I am called by your name, O Lord, God of hosts. – Jeremiah 15:16

image: illustration by Richard Scarry, I am a Bunny