I recently had the honor of being a guest author for Orphan’s Tree, and the following poem was originally published on their blog in May 2014. http://www.orphanstree.org

We were in Paris,
a layover on our way back from the Ukraine,
and we, our mission team, went out to see the city.
I was the youngest member (or nearly),
and I remember detesting the decadence,
the joie de vive,
and the way my team mates, mostly adults,
were able to compartmentalize their grief.
I am dazzled by Paris now,
but in those hours
I found myself hating the way
french fell from local lips,
carefree and lovely,
as if children weren’t starving
for food, for care
elsewhere in the world.
I thought of the Kanev orphans
clinging to each other and to us,
insisting their devotion and affection
into our arms and our chests,
pressing tin toys and warped plastic figures
into our palms,
desperate to be remembered,
daring to dream we’d come back for them,
and that perhaps their lot could be American too.
We walked the Seine
from Notre Dame to la tour Eiffel,
every cobbled step somber,
my legs lead.
I thought of Nicolai, the camp director,
stern and brusk like an army gym teacher.
He was there with those abandoned kids,
and I loved him for it.
I wanted to go back.
Back to the concrete camp
on the green Dnieper River.
Back to the rubbled amphitheater
where Soviet soldiers once gathered
for announcements and programs,
before the buildings broke
and Vodka flowed into young lives.
Back to wide brows.
and brave faces.
18 years later
a few of the kids have found me on Facebook.
They remember too, and well,
the weeks we spent at the camp.
They tell me of their problems and ask for prayers,
but they no longer ask to be my sister or my child.
They mention money,
and for escape from violent government.
They speak of bombed roadways to work
and nights spent in factories,
away from their own children,
when it’s been too dangerous to go outside
after their shifts.
They type, “I love Jesus… but I am alone.”
My world is a city of lights
and they are in the dark.

Occasionally I dream of the concrete camp
and the way the grass grew through it.
The sky is like a western plain’s
with space for clouds to take their shape,
and time to wait for storms to pass.
The sun pierces shadow,
changing the pavement
warming the skin,
and children play all day. 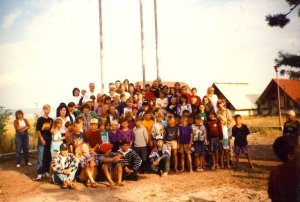 If you love me, you will keep my commandments. And I will ask the Father, and he will give you another Helper, to be with you forever, even the Spirit of truth, whom the world cannot receive, because it neither sees him nor knows him. You know him, for he dwells with you and will be in you. I will not leave you as orphans; I will come to you. Yet a little while and the world will see me no more, but you will see me. Because I live, you also will live. -John 14:15-21

Orphan’s Tree Mission: bringing the benefits of family and God’s hope to Russian orphans when they are most alone.
To learn more about Orphan’s Tree & their outreach: http://www.orphanstree.org

One thought on “concrete camp”

This site uses Akismet to reduce spam. Learn how your comment data is processed.